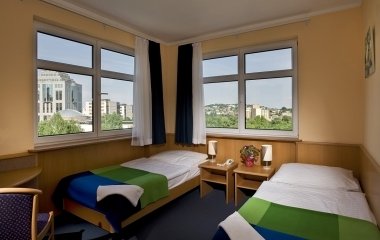 Our 28 modern, air-conditioned, comfortably furnished bed and breakfast hotel rooms guarantee the pleasant stay in Budapest or our esteemed guests.

Jagelló Business Hotel is located in the 12th district of Budapest, near to MOM Park and Budapest Congress and World Trade Center. The closest junction to the hotel is called BAH junction which connects the M1 and M7 motorways with the streets and avenues leading into the city centre.
The Jagelló Hotel is ideally placed for business travellers or tourists requiring accommodation and arriving on the M1 or M7 motorways.
Due to its central location, the hotel can be easily reached both by car (on the M1 and M7 motorways, via Budaörsi street and Jagelló street) or by public transport services (buses: 139, 110,112, and 105 bus or trams: 17, 59 and 61).
The city centre and the main tourist spots are within 35 minutes walking distance, or a 10-minute drive, from the hotel.
The Bus Nr. 112 which takes the guests directly to the city center has a bus stop directly next to the hotel.

The Liszt Ferenc Airport is located within Budapest's city boundaries, 16 km from the City in an eastward direction, running alongside the Main Road Nr. 4.

Similarly to other airports, Budapest Airport operates a 'shuttle service' called 'Airport Minibus'. Passengers are taken directly to their requested destination on minibuses with a capacity of eight to eleven seats. Both the bus drivers and the staff at the booking desks speak foreign languages and they are fully conversant with Budapest and its traffic, including the simplest and fastest routes.

The guests who use the Airport Minibus can obtain up to date flight information directly from the airport during their journey.

Jagello Hotel is also accessible by Public Transport. Passengers are taken from Terminal to Köbánya-Kispest metro station by a direct bus service (called Bus 200). From there you can reach Ferenciek tere on the "Blue" (line 3) Metro, from where you can take bus number 112. You should get off at the stop named Sirály utca, which is the final destination for guests residing at the Jagello Hotel.

Sign up to our newsletter to receive the news and best offers.